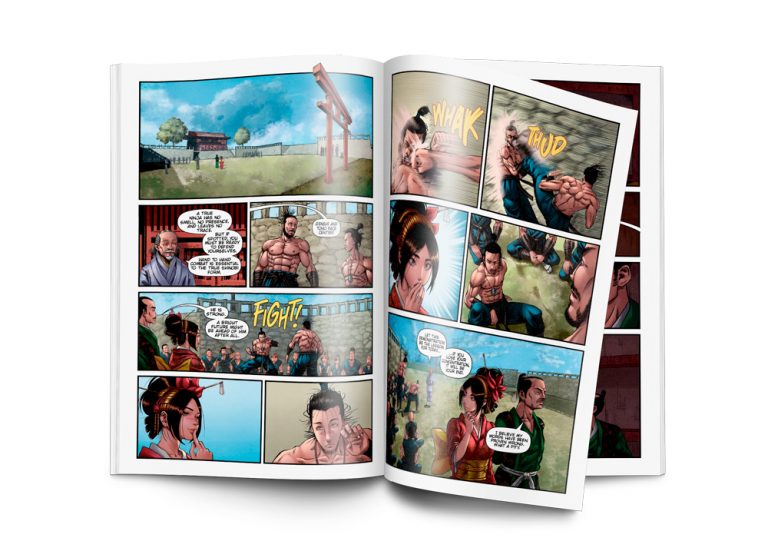 Mad Cave Studios produces independent comic books for teens and adults. They have some pretty cool titles and I had the privilege to read Honor And Curse #1, the tale of a Shinobi named Genshi who holds a terrible secret. Keep in mind, this is for mature audiences.

In feudal Japan, Genshi and his brother witnessed their parents brutal murder by bandits. Now Genshi is training to become a Shinobi for the Iga Clan Lord Haruki. As he trains, Genshi keeps having strange nightmares where he sees a dark figure trying to capture him. He confides in his friend Takeshi, who urges him to focus on his training as rival clan Koga marches on them. Meanwhile, Genshi has a forbidden romance with his Lord’s daughter Lady Akemi, who holds a secret.

Written by Mark London with art by Nicolás Salamanca and colors by Tekino and Jonathan Prada, Mad Cave Studio brings an excellent and original look at feudal Japan. Both the writing and the artwork is top notch. It is not some run-of-the-mill, tossed together comic. This first issue brings the story to life and has everything a nerd could want. It’s got action, tragic backstory, Martial Arts, and characters with depth. I can;t wait to see what else this series has in store.

What do you think? Let me know in the comments below and tell me if there is something you would like me to review. While you are at it, check out my list of favorite films from 2018 and the novella The Princess And The Peacock by CS Johnson. Don’t forget to like, share, and subscribe for more posts like this one.

By the way, did you miss my book announcement? Check it out.