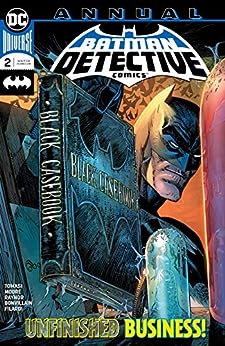 In France, a brutal vigilante in a skull mask stops a mugger by killing him and later stops a band of mask men from robbing a store, wiping them all out with scythes and bullets.

Batman hears about this vigilante and it causes him to check the “black casebook,” which details cases that he failed to solve or had severe mistakes. He reads to Alfred the tale of Judson Caspian, who was also a brutal Gotham City vigilante named the Reaper who killed any criminal he came in contact with. Batman then travels to the European nation of Greece where he thinks this copycat will strike next.

I was not much of a fan of Batman: Year Two, the story this “annual” issue references. However, I felt like Tomasi did a good job of integrating it into this “DC Rebirth” universe. He is a good writer and while I was not a fan of Detective Comics Medieval story-arc, I do think he is an excellent writer and this story definitely shows his ability to respect for past stories while crafting a new series.

Likewise, Moore and Raynor’s artwork is impressive. They nailed it from the streets of Gotham City to the roads of Europe, they really have a talent for character design, especially for Bruce Wayne and his vigilante identity.

What do you think? Let me know in the comments below. Tell me if there is a comic book, movie, or novel you would like me to review. While you are at it, check out the Mad Cave Studios talent search and the dismal news DC Comics received. Don’t forget to like, share, and subscribe for more posts like this one.