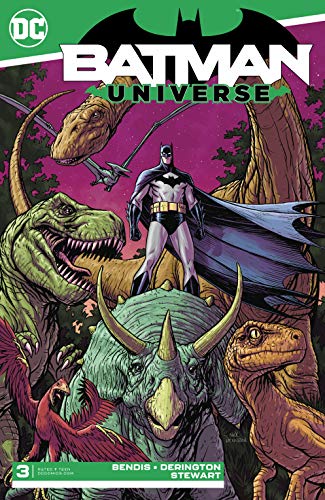 Batman Universe is written by Brian Michael Bendis with artwork by Nick Derington, who also did the cover art. Though it was speculated that Bendis might be taking over Batman’s main title series, DC Comics confirmed that former Detective Comics writer James Tynion IV would assume writing in January.

In the third issue of Batman Universe, after battling a poisoned Green Arrow, Batman awakens on Hawkworld, where he is questioned about the object the Riddler stole, now called the Fabergé egg, from the Gotham City museum in issue one. However, he is still covered in the strange energy brought on by the egg. It sends him to Gorilla City before the Dark Knight is recovered by Green Lantern and Cyborg where they track it to Dinosaur Island in the hands of Vandal Savage.

While I did enjoy the first two issues, I will admit that I was unsure about what the series was supposed to be. However, it becomes apparent in this issue. It is an update of the classic Batman team-up series ‘The Brave And The Bold’ which saw Batman would partnering with various DC Universe heroes. It would later serve as the basis for an animated show.

Batman Universe definitely captures and modernized that concept, fleshing out the story. A few people were hesitant about Bendis taking over a Batman title, but he does a very good job of portraying the Caped Crusader.

What do you think? Let me know in the comments below. Tell me if there is a comic book, movie, or novel you would like me to review. While you are at it, check out my movie reviews of Brightburn, X-Men: Dark Phoenix, and Godzilla: King Of The Monsters. Don’t forget to like, share, and subscribe for more posts like this one.