I was first introduced to Ayn Rand through the film adaptions of Atlas Shrugged Part 1 and Atlas Shrugged Part 2: The Strike, and then I watched The Fountainhead, which I reviewed as a Classic Film. After enjoying the stories in these films, I decided to pick up one of her books. I started with her very first novel: We The Living.

She claims in the Introduction that is partially autobiographical and an expose on what it was like to live under Soviet Russia. 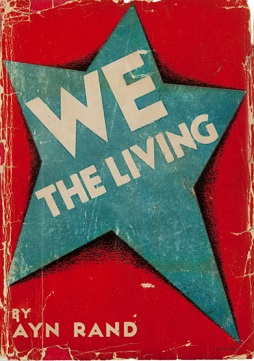 The story follows Kira, a native of Petrograd (now called Lenningrad) who was born of an aristocratic family that had everything they owned taken from them via the Communists. She decides to take some advantage and study to be an architect. She later meets Leo, who she soon moves in with, but then meets Andrei, a dashing comrade who does not hide his feelings for her.

The love triangle builds as Soviet Russia demands more from her, Leo, Andrei, and her family. Her family is forced to live in a tiny apartment and Kira and Leo are forced to give up rooms in their apartment. As the plot builds and builds, Kira finds herself as Andrei’s secret mistress so she and Leo can survive, but Leo ends up embroiled in a conspiracy that is masterminded by one of Andrei’s rivals at the Party.

While I enjoyed the story immensely, it was a bit complicated in parts. The author would introduce characters who would seem important, and then they would just vanish, but soon reappear but they lacked their importance from before. The ending also kind of left me wanting, but it left nothing open.

That being said, I loved reading how the socialists wanted to take power away from brutal dictators, even killing innocent victims to do so, but then they, as the Communists, became the oppressors themselves. You can see the conflict in Kira as even her dreams of building skyscrapers are dashed away and now she only wants to survive. You see Andrei as he slowly begins to realize what his party has become and the inner turmoil of being loyal, but also standing by his principles.

In today’s world, I believe this book to be more relevant than ever and I recommend it. Though there are some flaws in Ayn Rand’s philosophy, but I do see her belief in the strength of the individual as something to applaud.