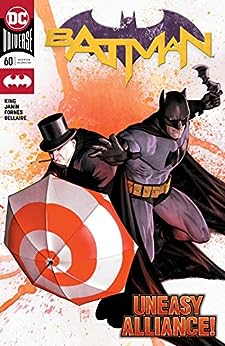 Covering DC Comics Batman issues 58, 59, and 60, “The Tyrant Wing” is written by Tom King with art by Mikel Janin and Jordie Bellaire, this story-arc offers a unique plot that has a great start, but then leaves the nerd reader hanging.

Follow his battle with the KGBeast, Batman returns to Gotham City where he makes contact with Oswald Cobblepot aka The Penguin who claims to know a secret. According to him, Gotham is secretly being run Bane, who is currently being held in Arkham Asylum. He is also the one who ordered the shooting of Nightwing. However, Bane seems to be mentally broken.

The Dark Knight goes on a rampage through Gotham. He beats villain after villain and even punches Commissioner Gordon in the face in order to find some sort of proof of Bane’s involvement. As he alienates his allies, Batman soon finds a darker knight waiting in the wings.

The artwork is superb in this series. It really shows the chaos that is going on in the plot. It displays the destructive nature of what Batman is going through as he tries to prove Bane is behind recent events in Gotham’s corner of the DC Universe.

As for the story-arc, it has a great start as it really drives the pain that Batman is feeling at allowing Dick Grayson to get hurt. King is good at telling a story about pain. However, as the plot moves forward it begins to lose focus on what it is about. It starts as Batman reeling from being rejected by Catwoman, his first son being shot, and from losing control. It seems to just become a confusing look at Batman’s anger and his desire for vengeance. Is it justified or not? The story cannot seem to decide.

What do you think? Let me know in the comments below. Tell me if there is a comic book, movie, or novel you would like me to review. While you are at it, read Rosemary Dewar’s guest post and my review of the Batman Who Laughs #1 comic book. Don’t forget to like, share, and subscribe for more posts like this one.